HaZardModding is currently offering you two Coop Mods, each Modification requires that you own a copy of the original Game, updated and patched to the latest official version.

This, our first Coop Mod, started on a piece of paper as a drawing of the map secret1 from the Singleplayer.

In December 2012 the Mod has reached a Final state with the version 6 and is since then Complete, how ever the Mod is updated from time to time.

The version number 6 indicates that this is the 6th Core rewrite of the Coop Mod. Only a few scripts, the UI and some related files stayed the same. Everything else had to be done from the scratch, to work with the 6th version that was written in C++ instead of Morpheus Level Script.

The development of the 6th version spanned over a year with 2 people developing.

Thanks to the use of C++ Converting a regular Singleplayer map into a Coop Map is a matter of minutes, hours or maybe a few days, depending on the complexity of the map, instead of days or even several weeks. 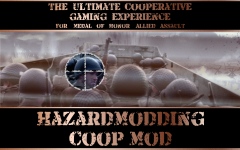 This Coop Mod was started after playing the "Medal of Honor: Cooperative" Mod, which turned out to be unplayable.

So we created the HaZardModding Coop Mod.

We went trough great length to make this Coop Mod work great! We put much effort in to:

We hope you enjoy our latest Coop Mod!