Updater tool installing and updating the HaZardModding Coop Mod for Star Trek Elite Force II. Designed for everyone who wants to have it simple and elegant.

Providing many additional tools and features, including a Master Server Patcher 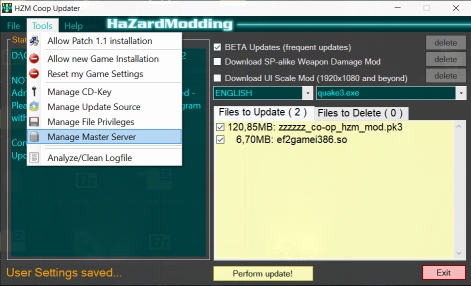 The HaZardModding Coop Mod allows you to play the Single-Player Story and all the Secret levels Co-Operatively in Multi-Player. Supporting up to 8 players via LAN or Internet. Each Player can chose one of 3 Classes with specific abilities, to support the Team. Using the Tricorder primary scan mode when close to a Player, will activate the specific Class ability.

The HaZardModding Coop Mod allows you to play the Single-Player Story Co-Operatively in Multi-Player, supporting up to 8 players via LAN or Internet.

All Missions from Allied Assault are completed. Missions from Breaktrough and Spearhead are planned to be released in the future. Along with massive improvements over the Mod Core files and the already finished AA levels.

You can find most of the Downloads on: ModDB.com